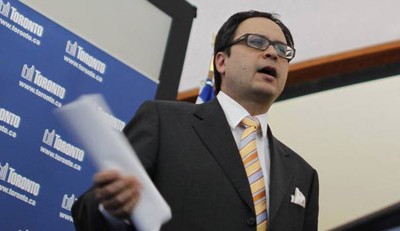 Toronto city council has halted its contentious ban on plastic shopping bags, handing a victory to Rob Ford at what could be his last meeting as mayor.

Councillors voted Wednesday to kill the proposed bylaw that would have enforced the ban beginning Jan. 1.

“We’ve made a decision. There is no ban on bags,” Councillor Denzil Minnan-Wong, the chair of the public works committee, said. “There is no five-cent charge [for bags.] We have spent enough time at council dealing with this. We need to move forward.”

Mayor Ford – who is appealing a judge’s decision ordering him out of office for violating a conflict-of-interest law – is a long-time opponent of the bag ban, which he derided as “outright stupid” when council adopted it without a staff report or public consultations in June.

However, the 38-7 vote to scrap the bylaw had less to do with the embattled mayor than with two legal challenges to the looming ban. The city’s legal department has signalled the municipality could lose those lawsuits in court.

Council also voted to try to reach settlements with the industry groups that filed the legal actions – the Canadian Plastic Bag Association and the Ontario Convenience Stores Association – in a report that remains confidential.

“We’re very pleased the bylaw is not being enacted. The plastic bag ban was quite unnecessary,” Joe Hruska, a spokesman for the Canadian Plastic Bag Association, said, adding his group would wait to see the city’s confidential offer before deciding whether to withdraw the lawsuit.

The Toronto Environmental Alliance bemoaned the decision, calling it more evidence that council is not committed to diverting trash away from the dump.
“It’s a sad day for Torontonians and for the environment,” Franz Hartmann, the executive director of TEA, said.

“You’ve got to just scratch your head that essentially a very, very small industry has essentially scuttled something … that cities across the planet are doing.”

The mayor did not speak during the debate on the item, but his brother, Councillor Doug Ford, urged his colleagues to kill the bylaw.

Afterward, Councillor Ford called the vote proof his brother retains support on council. “We have the votes,” he said. Asked if it was a win for the mayor, the councillor added: “It was a big victory for the people of Toronto. That’s who the victory is for.”

The vote does not mean there is no possibility a ban could be considered at some point in the future. Council also endorsed asking for a staff report on ways to reduce plastic bag use, which will go to the public works committee in June.

Councillor David Shiner, the member of the mayor’s executive who moved the original motion to ban bags, insisted the issue is not dead.

“The right thing to do is to get rid of the single-use plastic bag. We’ve two taken two great big steps forward and one small step backwards on the issue and I think it’ll come back to this council.”

Despite the mayor’s promise to rally public support against the ban, Mr. Shiner said he received very few direct complaints about it.

“Nobody phoned. I had a dozen phone calls in the end,” he said. “There’s no big Ford Nation out there calling on this.”

Reproduced from The Globe and Mail